What do A&A and a pizza shop have in common? More than you’d think… 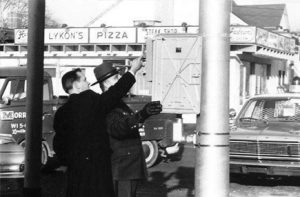 When Albert Lykon, owner of A&A, was a boy, he worked at Lykon Pizza, the pizza shop in Levittown, PA, founded by his parents, father Andy and mother Ramzy.

Andy and Ramzy were both hard-working children of first-generation immigrants. Andy’s parents were Czech and Hungarian and Ramzy’s parents both emigrated from Lebanon. Both Andy’s and Ramzy’s parents were extremely hard-working. Andy’s father was primarily a coal miner; in the coal region just outside of Scranton/Wilkes-Barre, PA. Ramzy’s parents made and lost their fortune several times over their adult life, with several businesses. Her father started as a huckster with a produce wagon and later owned a variety of businesses that included a steel service center, a few small coal mines and rental properties. As an adult, Andy was particularly influenced by Ramzy’s father and his bold entrepreneurial nature.

As a young family, Andy and Ramzy worked hard, and every member of the family had a role to play in the business. Each of the seven children was put to work in the shop at the age of five. By the time Albert, the eldest and current A&A owner, was 10, he was managing the cash register, talking to customers, and taking orders.

“Our dad always involved us in the family business. Dad was encouraging and let us work through things to learn,” Albert recalls. “It was a tight family working environment with strong values and a solid work ethic.” 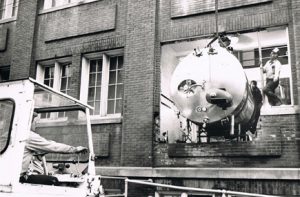 Tank Removal – Andy leaning out of the building to signal the crane operator; his son Nick Lykon.

Patriarch Andy was a natural problem-solver and entrepreneur. When he saw an opportunity to sell pizzas into the local high schools for lunches, he seized it. Expanding these relationships, he started providing baked pizzas and the ovens to bake them in to these same high schools for selling his pizza at football games and fundraisers. Soon he was providing the same for carnivals and other community fundraising events. It was immediately clear, however, that hauling these bulky pizza ovens to and from community events was difficult. He tinkered with his trucks and trailers and figured out how to modify them, making it easy and safe to transport these heavy ovens to the venues where community events were held. Providing schools and community groups with his pizza and the ovens to cook them for fundraising became a successful side business for Lykon Pizza.

Eventually, the revenues from these side businesses surpassed those of the pizza shop. The Lykons realized it made sense to focus exclusively on their machinery business and closed the pizza shop to focus on the new business. In the early years, most of the revenue came from buying and selling with the smaller portion coming from equipment moving jobs. As the years passed, this gradually evolved to be the opposite, with most of the business being generated from rigging and machinery moving. The business was initially known as A&A Rigging. 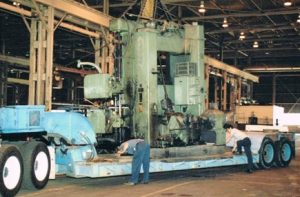 In the early years, the Lykons had only one boom truck and a small electric forklift. But they soon purchased a rollback truck, a 1960 Mack B-61, and a few trailers. The business continued to expand and the Lykons continued to innovate, gaining a reputation for being able to do the difficult jobs. They were also early adopters of new technologies and equipment, such as being the first company in the mid-Atlantic region to use sliding axle type tilt trailers.

The company’s reputation steadily grew. They were hired to work with bigger machines and make more difficult moves. By now, A&A had acquired a wide range of machinery. In 1992, A&A moved from Bristol to Tullytown, PA, which allowed them to add machinery storage and warehousing to their list of services.

Today, A&A has a nationwide reputation for being able to do the difficult while providing superior service, safety, and value in the rigging, millwright and machinery moving industries. One thing has never changed at A&A: the pride in quality work and attention to detail and safety. 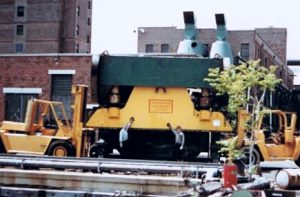 Reflecting upon his family’s journey from pizza baking and sales to movers of industrial machinery, current owner Al Lykon laughs and says: “We’ve come a long way, and moving large, specialized industrial equipment isn’t the same as making pizza, but what is the same is the critical importance we place on service, problem-solving, and meeting customer expectations.”

Need help with your moving needs? Discover the A&A Difference.