“Cooking” with No Downtime

A&A Machinery Moving, Inc. was contracted to replace a Dupps cooker unit at a Central Pennsylvania rendering plant. The cooker unit, with an assembled weight of 141,000 lbs., was replaced during the off-hours of a second and third shift to avoid downtime and maintain production.

Unload the new 125,000 lbs. cooker unit and ancillary equipment in a staging area outside the rendering plant approximately one month prior to the scheduled replacement date. While in the staging area, the cooker was modified with the addition of ancillary equipment. The now fully assembled unit weighed 141,000 lbs.

At the close of production on removal day, the cooker and surge bin were disconnected and prepared for removal. Because the current cooking unit was scheduled to be scrapped, the unit was separated into smaller units that could be removed faster and more economically.

Using a 60/80 Versa-Lift with boom attachment and dollies as the primary equipment, the fully assembled new cooking unit (now weighing 141,000 lbs.) was moved from the staging area into location inside the plant. The path of the cooker through the plant was on poor, concrete surfaces (irregular, non-level, spalled and eroding), so the path was prepared with steel plates over the concrete to accommodate the dollies.

In addition to the poor concrete surface, the ingress pathway had many turns and doorways with limited clearances that had to be navigated. Additionally, there were several elevation changes due to areas of sloped concrete for drainage and/or retention of liquids. Some of these elevation changes required cribbing under the plate and/or jacking of the unit over berms. 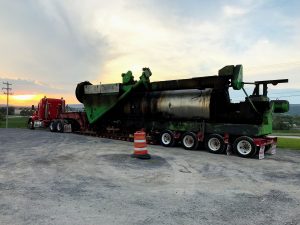 Old Cooker removed from plant and loaded on trailer to be scrapped. 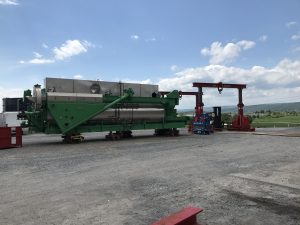 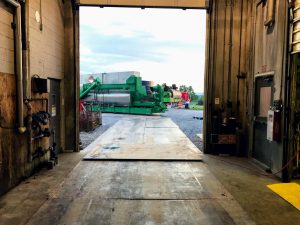 Cooker sitting on dollies waiting to be placed in location in the plant. 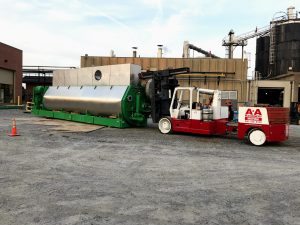 This project was performed at a rendering plant that received animal by-products daily from local processing plants and converted these by-products into grease, high-protein meat products, and bone meal. Lacking a redundant process line through which capacity could be routed or the capacity to store any of the daily received by-products, they would not have been able to accommodate the essential need of their supplier network to receive their daily processing by-products without a solution that would allow them to maintain production.

This solution was delivered by A&A and consisted of a highly planned project with an advance preparation phase and a highly planned sequence of tasks executed during second and third shifts when the plant was not in production.