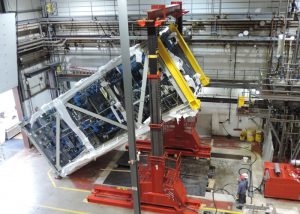 Off-load and erect two (2) fully prefabricated distillation column modules within an actively processing pharmaceutical environment. The project was completed in two phases, seven (7) weeks apart; each phase being one module.  Each 58,000lb. module was brought into the building on its side through an enlarged, grade-level temporary wall penetration. The modules were then up-ended into their operating position using 300 ton telescoping gantry and lowered onto anchor bolts in a recessed floor area. The two phases were required to be sequenced in non-preferred order with the first module installed being the once closest to the wall penetration. This created a more restricted ingress and tighter clearances to erect the second module. For both modules, the gantries operated with zero overhead clearance for the tilt-up. Primary equipment consisted of 300 ton hydraulic gantry, two (2) Versa-Lift™ 60/80’s and a jockey tractor.

To up-end the columns and gain enough height to rotate the columns to their vertical position, the gantry posts were extended to full 37ft. height extension and zero clearance existed between the lift beam and overhead obstructions. 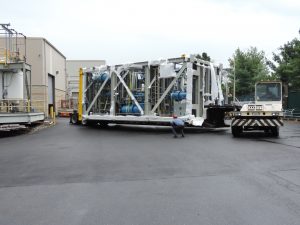