Rig into place GE LM2500, 25MW combustion turbine generator (CGT) weighing 350,000#.  Unit was recommissioned into an existing combined-cycle co-generation configuration that has been in layup. 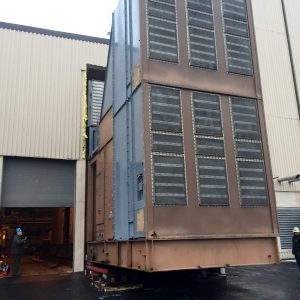 Unit rigged into place inside the building using hydraulic sliders. Inside building it was positioned and lowered onto existing cast-in-place anchors.  A 70’ slide path with tight entrance into building consisting of approximately ½” clearance each side between unit and building structural columns.  Major components were delivered to the site separately; package container module (box), combustion gas turbine, generator, air intake and miscellaneous peripheral equipment.  These components were assembled with the unit on the sliders.

A&A previously removed a GE LM2500 and GE LM6000 from this same facility in 2007, after which the steam generator and partially decommissioned station went into protective layup.

We provided client with an approach that resulted in an overall reduced schedule and reduced costs by mitigating additional jacking maneuvers and/or crane mobilizations.  We set slider track in advance so that client could sequence site deliveries of major components starting with the 150,000# ‘box’ which was placed on the positioned slider track.  Customer received subsequent components and with crane assistance, installed and assembled them within the container module already on the sliders, finishing with the air intake and miscellaneous top-mounted components.  When completed approximately two weeks following the slider track positioning, we returned to slide the now fully-assembled combustion gas turbine and generator package weighing 350,000# along the 70’ path into the building in position to lower over the anchor bolts.