The Background – This project consisted of relocating a historically significant, 7,000-ton capacity press from its current location as an outdoor monument inside a traffic circle to the nearby Smithsonian-affiliated National Museum of Industrial History (NMIH) to be preserved and exhibited.

Weighing an estimated million pounds overall, this four-post Whitworth press/forge was the first of its kind in this country. It was constructed by Bethlehem Steel in 1891 to produce critical heavy armor for ships and guns, which it did up through the end of WWII. After WWII, the press saw intermittent use, mostly for maintenance operations, until the plant closed in 1995.  In 2007, the building

housing the press was demolished to make way for a casino development project. Efforts to remove the press at that time were abandoned after unsuccessful attempts and plans were revised to construct a traffic roundabout around the press, repurposing it as an industrial landscape monument. 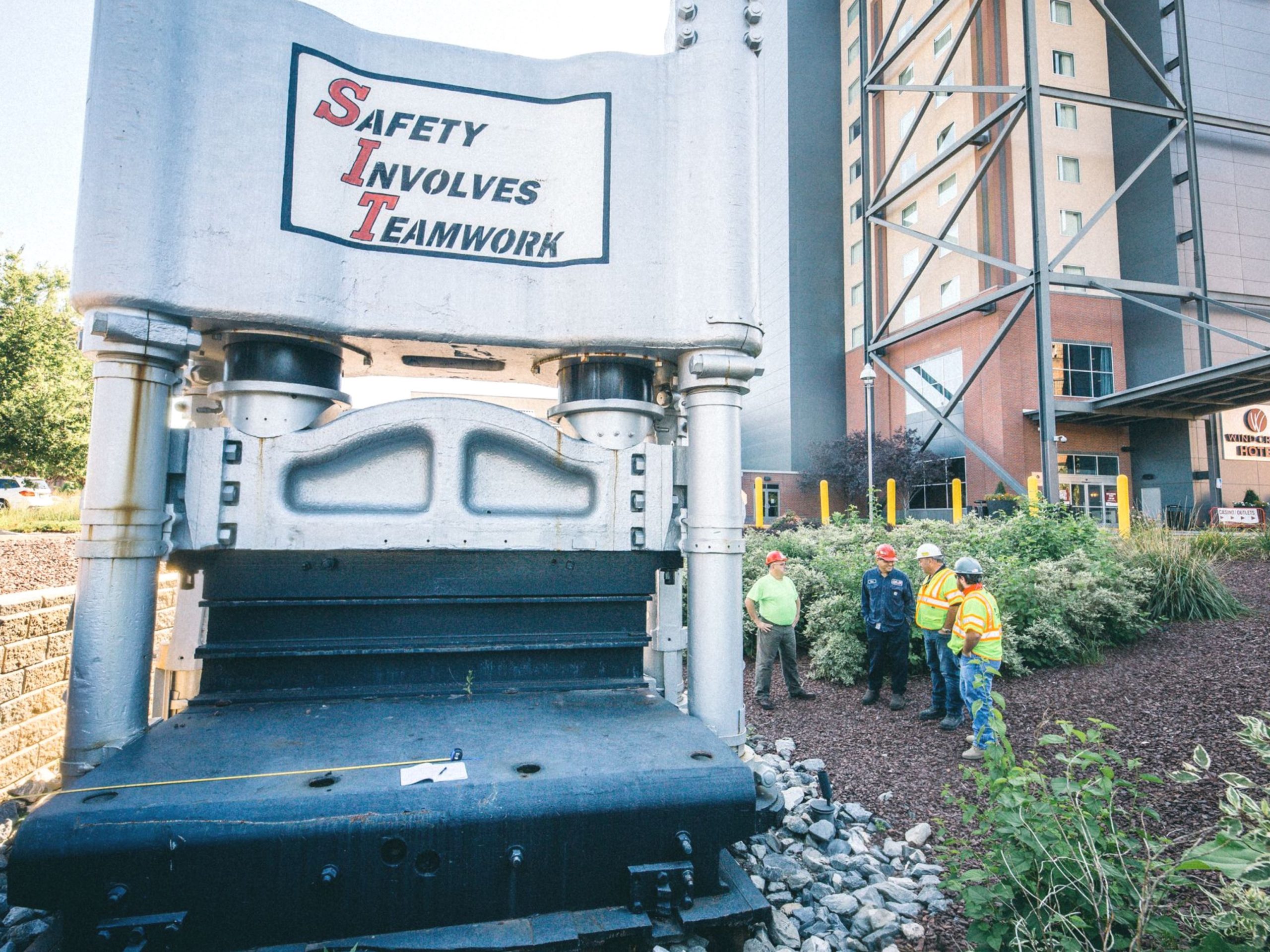 Casino expansion plans in 2020 again saw the need to remove the press. In spite of NMIH’s interest in acquiring the press, it was considered too costly to relocate and was slated to be cut in pieces with oxygen lances so it could be scrapped. Approximately ten months prior to the required removal date, A&A was invited to consult and consequently developed a relocation plan considered economically viable and environmentally desirable. The challenges, however, were considerable and unusual.

Casino expansion plans in 2020 again saw the need to remove the press. In spite of NMIH’s interest in acquiring the press, it was considered too costly to relocate and was slated to be cut in pieces with oxygen lances so it could be scrapped. Approximately ten months prior to the required removal date, A&A was invited to consult and consequently developed a relocation plan considered economically viable and environmentally desirable. The challenges, however, were considerable and unusual. 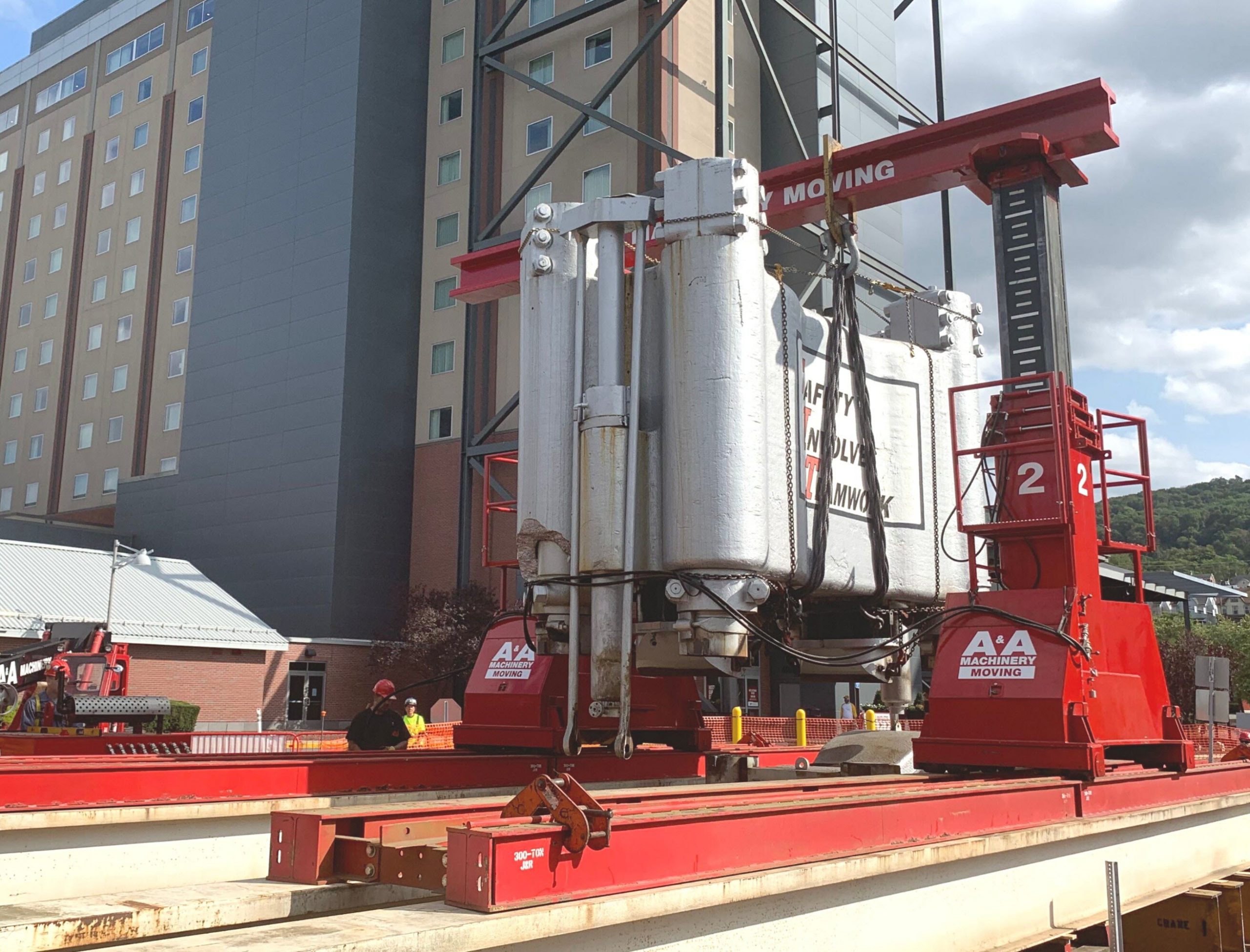 The Plan – A key element of our plan was to abandon the below-grade base of the press in place and instead have NMIH prepare the exhibit location with a poured concrete base and mounting plates that visually mimic the original base. Unable to be moved as a single piece due to both economics and press integrity (casting fractures), we recognized the press needed to be separated.  However, having not been disassembled in nearly 100 years and later exposed to the elements for almost twenty years, the tie-rods and rams were locked with corrosion and mechanical disassembly was not be possible. The second key element was to tactically separate press into major components, the heaviest of which we would lift with our gantry, using a wire-saw instead of oxygen lances. Oxygen lances would have resulted in heavy, irregular cuts difficult to weld or restore, and can create clouds of toxic, billowing smoke which would have been undesirable in this heavily used public area adjacent to an operating casino.

Breaking It Down – Unable to mechanically remove the cylinders and rams from the crown, nor uncouple the crown from the tie-rods, our plan involved cutting each of the four 18” diameter tie-rods in two places; just below the upper intermediate nut and again also through the 28” diameter lower intermediate nut above the anvil. This separated the press into three primary pieces to be relocated; a) an aggregate crown assembly consisting of the press crown and both hydraulic cylinders, rams, pull-back cylinders, and links; b) moving cross-head, and c) anvil. In addition, were the four sections of tie-rod. A gantry would be used for the crown and a crane for all else. 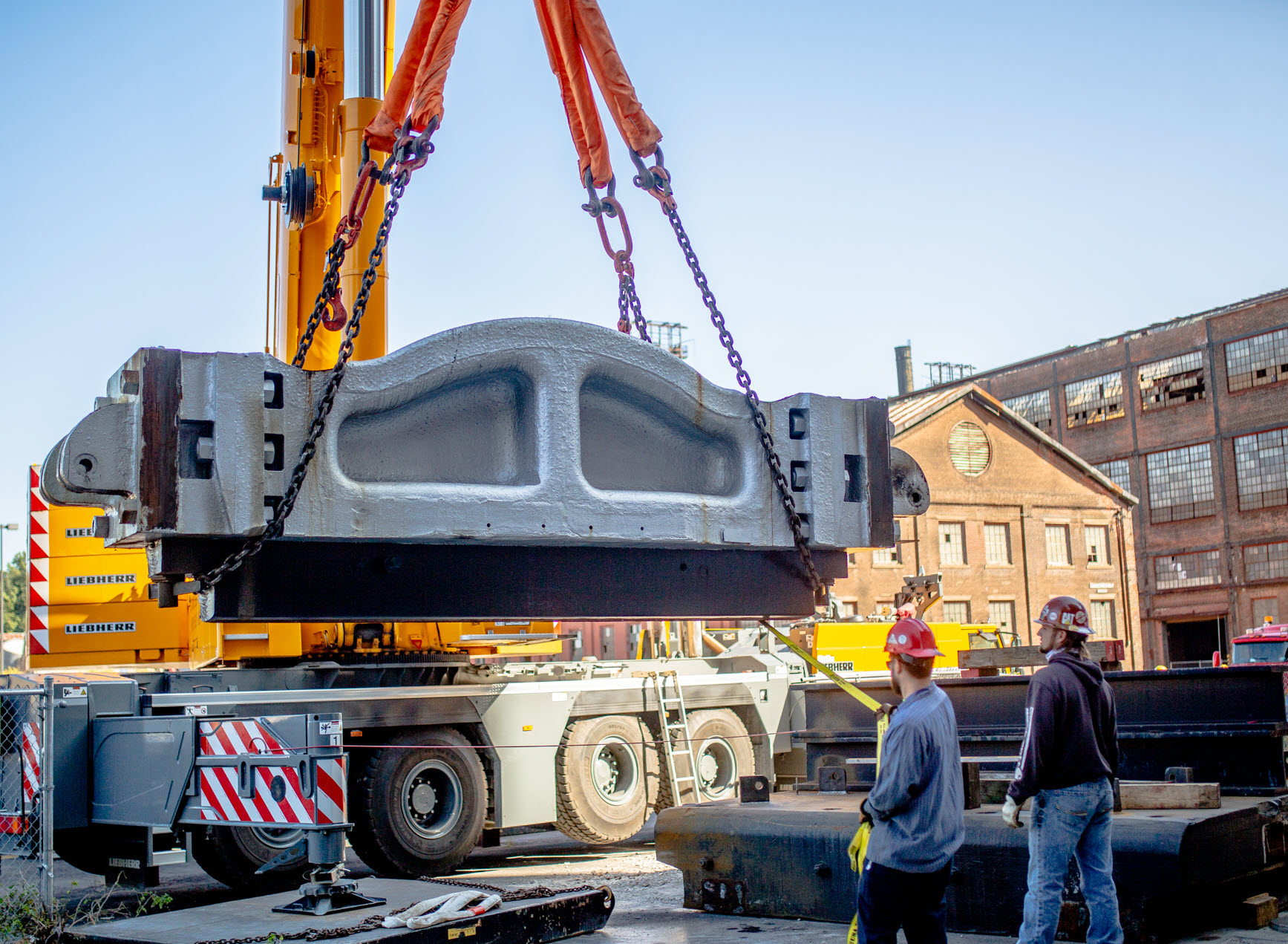 Crosshead at the museum site

What Does It Weigh? – The next challenge was determining the weights of each of the press pieces to be rigged. Since no drawings or any information on this press remained, we estimated the weights of these components, some of which were difficult due to being irregularly shaped and/or internally ribbed.  Our estimate of press components follows:

During the execution of the work, using gantry hydraulic pressures we determined the crown weight to be almost exactly the estimated 400,000#. Using the crane scale, the remainder of the components were within 5% of the estimated weights. 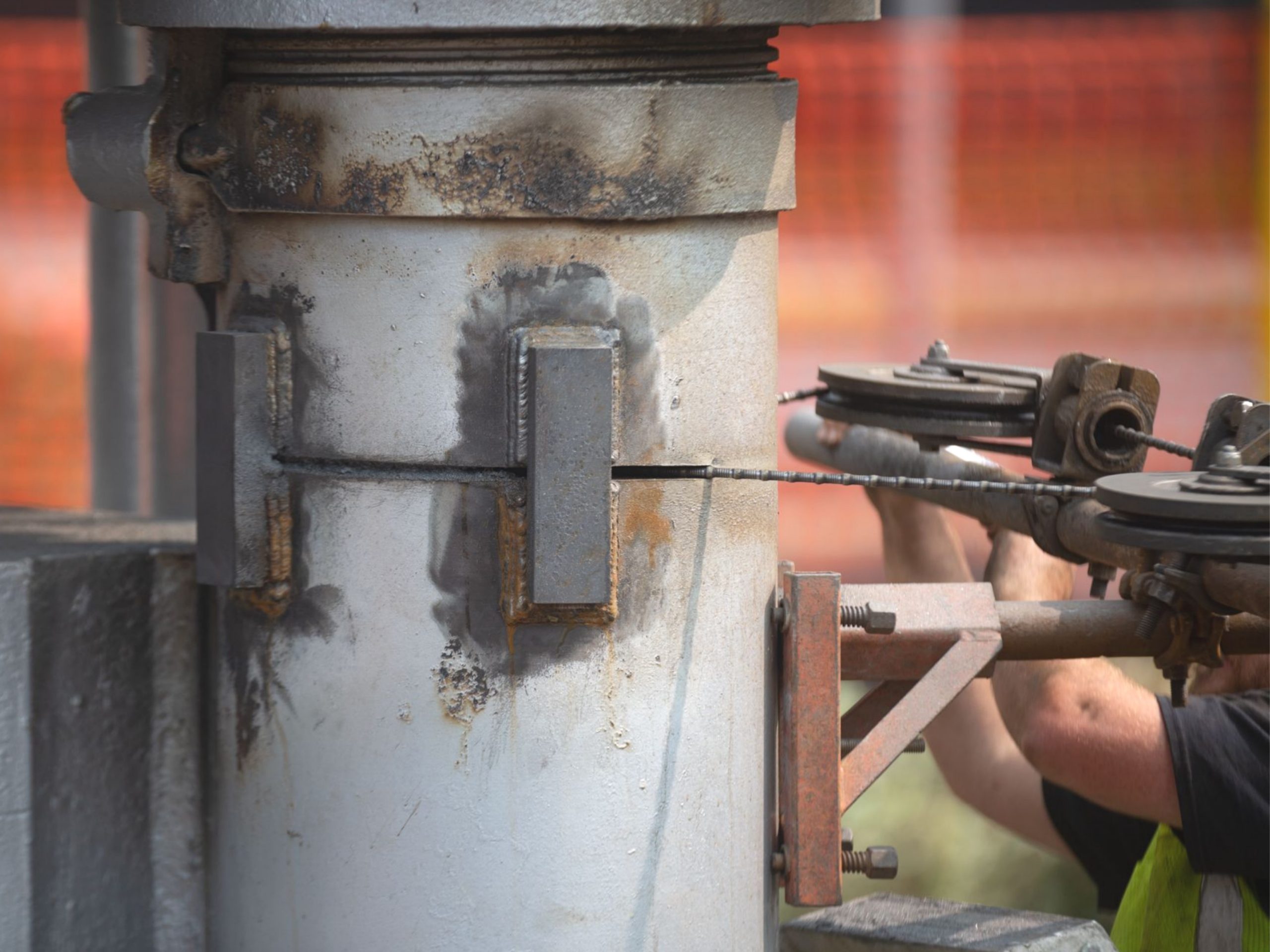 Making The Cut – We chose to cut the tie-rods with a wire-saw because it would give us clean and predictable cuts making structural reassembly easier. It was also safer; enabling us to make cuts without hot work or the toxicity/mess of smoke from oxygen lances. Each of the four tie-rods was cut through the 18” diameter section just below the upper intermediate nut under the crown and again straight through the 28” diameter lower intermediate nut above the anvil. We conducted metallurgy on the tie-rods to enable the wire-sawing contractor to specify the best wire for the application, and also to develop a welding procedure that would be used twice; first to weld two ‘keepers’ on each side of the tie-rod uppercut prevent wire-pinch during the sawing and secondly to weld the cut columns together after reassembling the press. Steel wedges were used in the lower cuts to prevent wire pinch. Each cut took 3-5 hours and required approximately 3 hours of set-up. 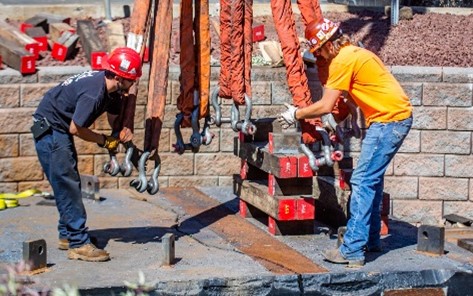 The Broken Anvil – Not the last challenge, but the last of the structural challenges involved the anvil. A single casting, this anvil at some point in the operating history broke in two along a middle line and was operationally ‘repaired’ with a series of lateral through-bolts. To evenly lift the joined halves of the anvil as a single unit, we designed a layout of eight lift points. At each lift point, we welded lift lugs geometrically aligned for a straight pull to a single overhead hook. We conducted metallurgy on the anvil to develop the proper weld procedure which like the tie-rods, also required pre and post-weld heat treatment.

Under The Microscope – The public exposure of the project was the final unusual challenge.  This press had long been the centerpiece in a central traffic circle adjacent to a busy casino complex and arts center 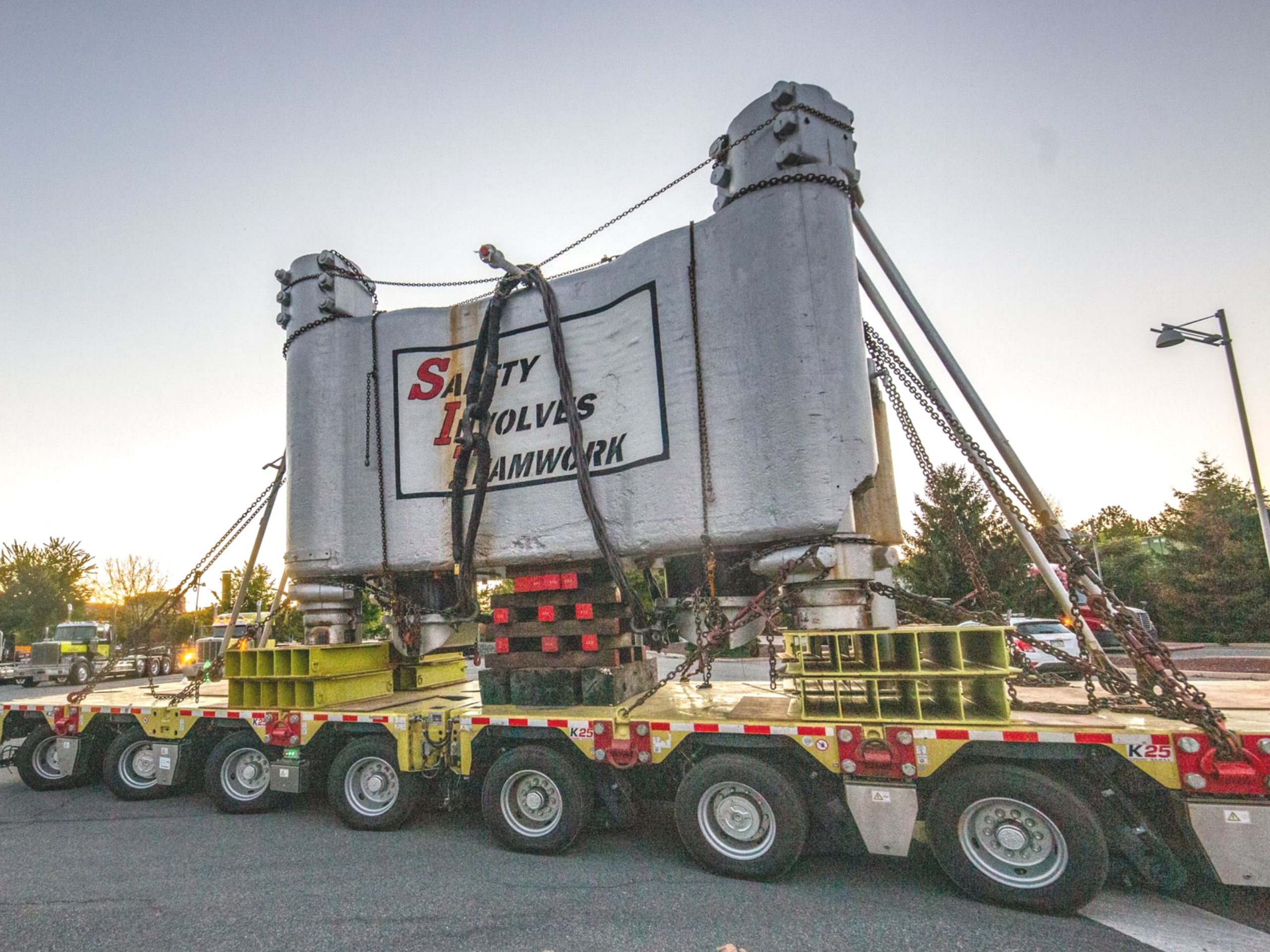 developed from the Bethlehem Steel brownfield. The relocation of this press from the casino to the museum culminated in a formal, credentialed media event also promoted as a public event by both the casino and the museum. The entire project would take place under the scrutiny of multiple photographers and videographers; both invited professionals and interested amateurs.  To help control and manage the media and public interest, we prepared information for the press and the public and designated a member of our senior management team to be onsite and interact with the press and public and avoid interruptions to our onsite team.

The Crown Lift – Lifting the press crown assembly (est. 400,000#) was done with a two-post 300-ton hydraulic gantry with a WF14x455# x 24.5’L lift beam and two lift links.  Eighty feet of gantry track extended from the press onto the roadway. The track was cribbed 8’-5” high alongside the press in the traffic circle to account for the elevation change. The rigging arrangement used a single 9-part x 1” x 50’ braided wire rope sling with a rated capacity of 139.6 tons in a double 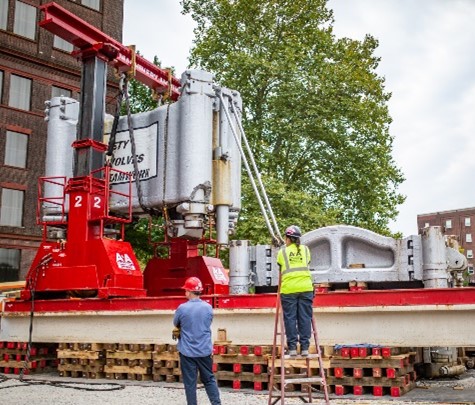 basket configuration. Evaluating the sling D-over-d ratio where it passed through shackles and contacted the bottom of the press required us to de-rate the slings to 81% of rated capacity, or 113 tons at each shackle (226 ton total); providing ample capacity for the 200-ton crown. Once lifted, the gantry traveled with the load to set it on a waiting 10-line self-propelled modular transporter (SPMT) for the ¾” mile trip on the private roadway to the museum site where it would be off-loaded and set in the same manner.

The Rest of The Story – After lifting the crown, the hydraulic gantry was removed and reset at the museum location for reassembly.  The remaining components were removed using a 400-ton hydraulic crane.  Once reassembled, the cut tie-rods were welded together using a procedure based on the tie-rod metallurgy.  The project was approximately ten months in the planning, and the rigging scope from site prep to completion was performed in 15 days. 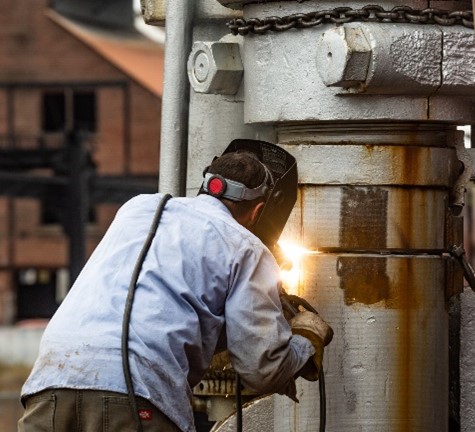