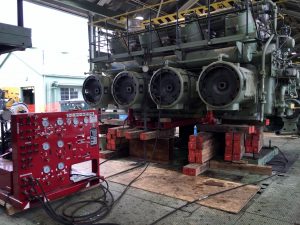 Units were configured in a single row inside a building, on independent grade level foundations elevated above a 4’ deep sub-grade floor for mechanicals and utilities.  This surrounding sub-grade level was covered by decking to match the foundation/ground level.  This decked area surrounding the compressors was structurally inadequate to roll or skate the engines across.  Since the building was slated for eventual demolition, a typical alternate course would have been to remove the roof and lift the units out.  However, the building interior and most of the building surfaces were contaminated with PBC’s and would have required cold-cutting along with special handling/remediation of those surfaces in that process.  Additionally, roof openings would have allowed the entry of rainwater creating potential hazards in containing and remediating PCB-contaminated rainwater.

Based on this, we selected a jack-and-slide approach.  We raised each unit using specially designed and fabricated jacking lugs, above the foundations to a level allowing a truck trailer underneath.  We installed slider track on fabricated risers transverse to the trailer, bridging between foundations of a pair of units.  This allowed us to slide each unit sideways to open the area over the foundation. We then removed the track sections over the foundation and cribbed and plated a path in from the door opening in front of each unit.  We backed the trailer in over top of the foundation, positioned the slider track sections previously removed back over on top of the trailer, slide the units over the trailer and jacked it down on the trailer after removing the slider track.  The equipment was moved sequentially down the row to repeat this process for each of the six units.

This approach enabled units to be removed without creating additional environmental hazards and substantially reduced their overall project schedule inclusive of decommissioning, remediation and demolition.