Another remnant of the city’s old manufacturing might has moved to join the growing collection at the National Museum of Industrial History.

Developed in England and completed in 1891, the Hammer and Press Building of Bethlehem Iron Company would help modernize the U.S. Navy, bending huge armor plates for vessels such as the U.S.S. Maine, U.S.S. Texas and Admiral George Dewey’s flagship U.S.S. Olympia, famed for its actions at the Battle of Manila Bay.

The press was cut free of its 18-inch pylons using a diamond-coated wire saw, and was raised, moved, and placed onto a vehicle for transportation to its new home, which took place this week. The press can be viewed outside the NMIH building on Third Street. 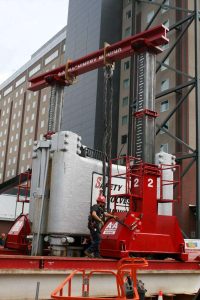