The Morning Call – September 18, 2020
A 900,000-pound piece of Bethlehem Steel history is on the move.
Crews on Friday took hours to free and transfer just a 135-ton segment of the massive hydraulic bending press from its base at Wind Creek Resort, as a complex process is underway to relocate it to the National Museum of Industrial History.

The press will be the centerpiece of the new 17,000-square-foot outdoor park at NMIH — an expansion that will double the footprint of the museum when it opens to the public later this fall. The $275,000 project will feature significant artifacts from Bethlehem Steel and the mining industry, telling the story of how raw materials were converted into finished steel products.

The outdoor park will allow much more of the story of Steel to be told, according to Glenn Koehler, director of marketing and public relations for the museum.

Built in 1887, the press is an important artifact and is believed to be the first of its kind put into service in the United States. Used for more than a hundred years, the press was responsible for creating massive amounts of military armor during WWI and WWII. It is likely the only one left in the country. 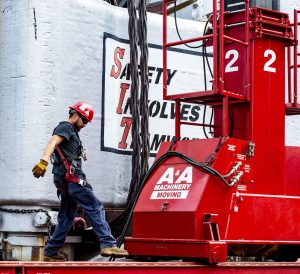