From Light to Dark
A large North American manufacturer of commercial lighting products closed their 400,000 sq.ft. plant located in Eastern Pennsylvania. Over the years, A&A Machinery Moving had been the long-standing rigging resource, handling much of the machinery and equipment within the plant.

Production at the plant ceased in Mid-October 2017, with a real-estate ready deadline set in mid-December. This timeline gave A&A Machinery Moving less than 60 days to dismantle, load, and remove all remaining assets within the plant, delivering the plant completely empty to the customer on-time. 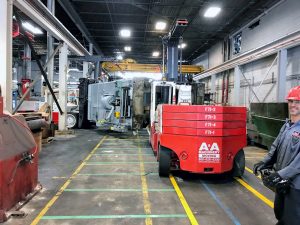 Rigging foremen are operating the Versa-Lifts remotely for better visibility maneuvering through the tight quarters of the plant, reducing the risk and damage to the press.

Before Decommission
Prior to start of the project, twelve (12) other sister companies across North America were brought in to buy any surplus assets within the plant. Roughly sixty percent (60%) of the manufacturing equipment was retained by the other sister plants. A&A Machinery presented a turn-key relocation package to dismantle, coordinate transportation and install company-purchased assets at their respective locations across North America. The relocation of the company-retained

Phase 1: Relocation & Redeployment
A&A Machinery provided all rigging foreman, and craft professionals needed to relocate the company-purchased assets to their respective plants. Approximately thirty (30) truckloads of machinery and ancillary equipment were relocated to their plant in Plympton, MA. A&A project managers and logistics team were responsible for coordinating all truckloads of assets from Bristol to Plympton as project schedule permitted. A&A also staffed a rigging crew at the Massachusetts plant to provide necessary unloading, installation, and reconnects of manufacturing machinery and equipment.

Another 10 truckloads of machinery and equipment were transported to a company plant in Mexico. A&A provided a trucking solution where loads going to the plant did not need to be trans-loaded at the border, reducing the risk of damage to the customer’s assets.

Presenting a Solution by Not Removing the Roof
Some of the larger manufacturing equipment retained by the customer were two 300 Ton Verson presses. Other rigging companies who bid on the project informed the customer they would need to remove parts of the roof of the plant to stand up both presses. Experienced project managers of A&A presented a creative approach to stand both 300 Ton presses within the plant without having to remove the roof by using a hydraulic gantry system and tailing the load with a heavy-duty Versa-Lift. 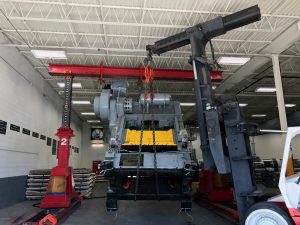 Setting into place a large press with only 6 in. of head room. This solution prevented us from having to remove parts of the roof of the plant.

Phase 2: Auction & Liquidation
Remaining assets not purchased and redeployed by the other sister companies were auctioned off. Our sister company A&A Machinery Sales partnered with national auctioneers to host a public on-site auction in the plant. Production at the plant ceased on a Monday and the auction was held on Wednesday. A&A Machinery Moving was named the exclusive rigger of the auction, handling 100 percent (100%) of the removal of auction items to ensure meeting the customer’s deadline set. The auction achieved a return on surplus assets of great than fifty percent (50%), higher than expected.

Over four hundred and sixty (460) pieces of equipment were included in the auction. The largest piece sold and removed at the auction was a 500 Ton Verson straight-side press. The press and supplementary equipment weighed over 460,000 lb. collectively, with the crown of the press weighing 110,000 lb. The 500 Ton press required eight (8) truckloads to relocate the machine and ancillary equipment to a sister-company plant in Mexico. A&A’s trucking solution to avoid trans-loading at the border reduced any potential risk of damage to the 500 Ton press.

Phase 3: Real-Estate Ready
Assets sold in the auction could be removed from the plant starting the morning after the auction. To create a more efficient auction item removal process, A&A Machinery Moving provided an on-site estimating team during the auction for buyers to receive quotes for the rigging, removal, and transportation.

All assets, ancillary equipment, and miscellaneous materials were removed from the plant in less than 60 from the auction date. A&A provided an on-site crew to remove all remaining scrap and clean all pits within the facility. The Bristol plant was delivered empty by A&A Machinery Moving to the customer by the real estate-ready deadline set. The turn-key package presented by A&A Machinery Moving was a success for the customer and the plant decommission project. The long-time customer of A&A once again discovered the A&A Difference.